Railroads in the Civil War

Prior to the Civil War in this country, railroads were a new and relatively untried invention. However, during the rebellion, railroads came of age. They became both strategic resources, as well as a military targets, precisely because they were strategic resources. During the war, soldiers, material and food were routinely transported by rail along with civilians and the raw material necessary to keep the war effort progressing. It was soon realized that the railroads would help to make or break the Union in this conflict which was so bloody that the combined total of all U.S. losses in all other wars would not equal the losses in that war.


When the war began, there were approximately nineteen million people living in the United States. Of these, nine million were living in the South, of which three and one-half million were in bondage. The South was largely an agrarian society dependent on cash crops such as tobacco and cotton and, to a lesser extent, staple crops to feed its peoples and armies. Two-thirds of the rail miles and four-fifths of the manufacturing power of the entire nation were located in states loyal to the cause of the Union. In all of the states which attempted to leave the Union, there was only one plant which could reclaim rail which was bent into what became known as "Sherman's Bowties." The South was at a distinct disadvantage in men, material, transportation and productive abilities.


There were more than two hundred railroads in existence at the start of the war. The majority of rail lines were found in those states which remained loyal to the national government. Most of these rails were four feet eight and one-half inches apart. By contrast, the South had only about one-third the mileage in the North and the gauges of the rails varied widely. This meant that the North could transport more troops and material to more places with less transfers due to gauge differences than the South. The South immediately realized the potential of railroads and used the rails it had to transport troops from one part not under attack to support fellow troops in a threatened area. The North was not so quick to learn this lesson.


An example of this is the First Battle of Bull Run in the summer of 1861. A large and unprepared Union Army under the command of General McDowell moved south out of Washington D.C. towards the rail center of Manassas astride the tributary known as Bull Run. A smaller and equally unprepared southern force under the command of General P.G.T. Beauregard blocked this advance ultimately aimed at Richmond, the Confederate capitol. The Northern forces were defeated when Generals Joseph Johnson and Thomas J. (Stonewall) Jackson arrived from the Shenandoah Valley with their armies. This concentration of secessionist forces was achieved by transporting these troops to the battle by rail.


The South was to employ this tactic for the rest of the war. The South could not politically afford to abandon any territory to the North and was therefore required to spread its limited number of troops to cover the numerous approaches to its territory which could be used for an enemy advance. Then when one area was under attack, the troops would come, usually by rail, from an area not currently threatened. 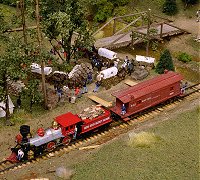 When Ulysses S. Grant was promoted to Lieutenant General and given command of all Union forces, he understood the advantage the South had in its interior lines of supply and the part railroads played. As long as the North squandered its resources in uncoordinated attacks upon the Confederacy, the rebels would be able to transport troops from one area to another in order to halt any Union advance. By applying pressure to all points of the South, advances could be made in more than one place and, in those areas where national troops could not advance against the secessionists forces because of their numbers, the loyal troops would be able to keep the rebels occupied and unable to reinforce other rebel units. As Grant said in his memoirs, those who could not skin could help by holding a leg.


At the beginning of the hostilities, the northern railroads did not contribute as they should have to the Union war effort. Most railroad executives were more concerned about the rates for transporting war material and the profits they would make due to the high demand for their services than they were for the welfare of the Union. For a period of time after the South fired on Fort Sumter, which initiated the war, miles of track ripped up by Confederate raiders were left in a state of disrepair and, while boxes of food and ammunition sat on sidings, railroad executives haggled with army officers over the cost of transporting the goods. Lincoln's Secretary of War, Simon Cameron, who was a prominent investor in numerous railroads, was forced to resign because of his profiteering by manipulation of the rates the War Department would pay for the transportation of its soldiers and material. Such corruption in the rail industry prompted the enactment of the Railways and Telegraph Act of January 31, 1862. This legislation enabled the President to take possession of railroads and run them as required to preserve public safety. The War Department would supervise any railroads taken over by the government. This act was the precedent for the United States Railway Administration of World War I and government influence on railroads in World War II.


Few northern railroads were seized under the act but those that were seized were organized into the United States Military Railroad (U.S.M.R.R.). The railroads, faced with this tough legislation, immediately fell in line to aid in the Union war effort for fear of being seized. Profiteering and corruption immediately fell off and trains began to move in an expedient way. Southern railroads, however, were routinely impressed into the service of the national government whenever Southern territory was taken by Union troops. For a short time, during the invasion by the Army of Northern Virginia into Pennsylvania, some Northern railroads were seized to adequately and efficiently deal with the threat posed by General Lee.


In order to deal with rebel attacks on Union rail lines, the North set up garrisons along rail lines to guard depots and bridges. In addition, large stockpiles of railroad materials were gathered in certain areas to be rushed to a damaged area so that repairs could quickly and efficiently be completed. The national government went so far as to have pre-fabricated bridges made of wood in these stockpiles. General Herman Haupt, the Union's brilliant and innovative chief of construction and transportation, is the one who initiated the stockpiling of pre-fabricated parts. In addition, he used ferries to transport loaded rail cars to Aquia Creek and his successor did the same thing at City Point so as to reduce the time normally associated with loading rail cars transporting them to the wharf, unloading the cars and then loading the barges for transfer to the next port where the process was reversed.
At the same time that railroads were recognized as benefits to the war effort, the military leaders also recognized them as great targets for destruction. General Nathan Bedford Forrest successful destroyed General Ulysses S. Grant's supply line, the Mississippi and Tennessee Railroad, South of Memphis when he first attempted to take Vicksburg. General Grant, lacking the necessary supplies, retreated to Memphis and, in order to feed his troops, ordered them to forage off of the land. When Generals Grant and Sherman again attacked Vicksburg the following year, they destroyed all five railroads which serviced both Jackson, Mississippi and Vicksburg. This prevented the easy transportation of troops and supplies by the rebels to the scene of the battle. By the time the troops and supplies arrived in the vicinity of Vicksburg, Grant's troops were too strongly entrenched and anchored to be dislodged from the stranglehold they had on the city.


After the Battle of Chickamauga, when the tables were turned and Union troops were besieged in Chattanooga, Grant used the railroads help to reinforce and supply his beleaguered troops who were half starved. This quick action by the railroads saved the Union garrison, allowed Grant to launch his brilliant battle to lift the siege and prepare the springboard from which General Sherman would undertake his March to the Sea.
General Sherman trained ten thousand troops in railroad repair before he left the vicinity of Chattanooga to begin his attack on Atlanta. He understood that his lines of supply would be under attack by local guerrillas and possibly organized Confederate units. Then, when he began the famous March to the Sea, his troops were so adept at repair of the tracks that the rail lines would often be in service within a day or two if not the same day.


When General Sherman cut loose of his supply line after the fall of Atlanta and continued the march to Savannah these same troops turned their abilities to the destruction of the railroads. The troops would pile up all of the ties from a stretch of track and place on top of these piles the rails taken from the same stretch of track. The pyre would then be set aflame and the rails would soon begin to glow red at the centers. The troops would then pick a rail up off the fire and take it to the nearest tree to bend the rail around the tree and, for added difficulty, twist the rail. They did all of this knowing the South had only one plant which could undo the destruction they had done to the rails. These actions crippled the ability of the South to react to Sherman's trek through the Georgia countryside and state capitol, as well as tax the ability of the South's shrinking industrial base to produce new rail and repair the old. General Sherman employed these same tactics when he left Savannah for his march through the Carolinas.


When General Grant began the siege of Richmond and Petersburg, two cities close to each other, he set up an enormous rail depot at City Point from which he provisioned his army. Without the miles of track, engines and rolling stock, Grant would have had to supply his troops with numerous wagons pulled teams of horses managed by teamsters which would have required more forage for the horses and more food for the teamsters. It is possible that General Grant may not have been able to continue his hold on the cities of Richmond and Petersburg if the railroads had not been built to carry supplies from the harbor at City Point to his troops at the front.


As this article demonstrates, the railroads were a new strategic weapon which enabled the North to defeat the South and thus preserve the Union and put an end to slavery. Without the railroads contribution to the war effort, the conflict would have been much different and cost many more lives than the devastating war actually took.